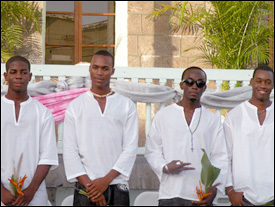 Noting that the contests would be twinned again this year, Ms. Caines said she is confident that the show would be a major success.

“On July 29th, Culturama patrons would experience two shows for the price of one with 10 dynamic contestants already confirmed,” she said.

“This year, we wanted to show appreciation to the sponsors in a big way, hence the introduction of a Sponsor Appreciation Swimwear,” Ms. Caines explained, adding that the five Ms. Culture Swimwear contestants are eagerly anticipating that appearance.

When asked about the reason for the changes in the Mr. Kool Contest, Ms. Caines revealed that “this year’s format is similar to when the competition started in 2001.”

“The Federation’s males have a lot to offer. Some have excellent beach bodies, some dress well and others are extremely talented so we thought it would be nice to have varying segments,” she explained.

According to Ms. Caines, this year’s Mr. Kool and Ms. Culture Swimwear contestants, like the Ms. Culture Queen Pageant contestants, have commenced training in public speaking and interviews. This, she said, would prepare them for the contestants’ launch, promotional videos and radio and television interviews which they will participate in.