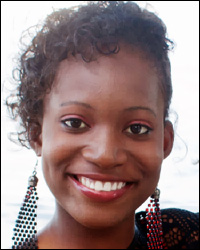 The eight contestants vying for the title of Miss Labour 2012/2013 will be guests of honour at a Cocktail Reception on Friday night.

The teens, who represent each of the eight constituencies in St. Kitts, will meet the Prime Minister and National Political Leader of the governing St. Kitts-Nevis Labour Party , the Right Hon. Dr. Denzil L. Douglas and other government ministers, Labour Party officials and invited guests.

The eight contestants will vie for the Miss Labour crown on the evening of Saturday 7th May 2012 at Carnival Village.

Seventeen”“year old Shenequa Powell, employed as an Assistant at Daniel’s Hair Salon, aspires to be a cosmetologist. She is a former Ms. Newtown 2004 Queen and loves dancing, drama and meeting people.

Natacia Claxton, the St. Christopher #2 representative is a 15-year fourth former at the Basseterre High School. She has her eyes set on becoming a Marketing Manager and is a member of the Debating Society, the Blue and Yellow Eagle Cheerleading Squad and the Cadet Corp. She is a former first runner-up in a past Ms. Shadorama and loves dancing and drama.

Sixteen-year old Nichelle Henry of St. Christopher #3 is a student of the Washington Archibald High School and wants to become an economist. Her extra-curricular activities are the Girls Brigade and WAHS Choir.

Kwahne’ Wharton loves singing, dancing and web Browsing. Although a 14-year-old student of the Verchilds High School, she plans on becoming a Teacher and a Model. She has the Girls Brigade, her Church Choir and Youth Fellowship as her hobbies. She too has stage experience and is a former first runner up in Ms. Verchilds High School.

Although  the youngest of the group, 13-year-old Jah’Neska Williams, of St. Christopher 5 is a Junior Spirit who attends the Charles E. Mills Secondary School. The 2A3 student loves dancing and singing and has in participated in the School’s Prince and Princess Show.

Nineteen-year-old Patricia Clarke of St. Christopher 6 teaches at the Dr. William Connor Primary School and aspires to be a model and an interior and fashion designer. She loves dancing, music, drama, reading and sports.

17-year-old Nahilah Watson of St. Christopher 7 eyes a career as a TV Hostess and Motivational Speaker. A 4G1 student at the Cayon High School, she is a member of a choir and is involved in cheerleading, the Student Council, the Molineaux Youth in Action and the A.I.M Dance Ministry.

The 19-year-old Clarence Fitzroy Bryant College student, Caley Greaux of St. Christopher 8 wants to major in hospitality and aspires to be an hotelier. Although a clerk at Rams Supermarket, she is involved in the History Club, is the Public Relations Officer for the Moravian Youth Council and is Queen in the Moravian Bible Pageant. She loves dancing, drama and meeting people.