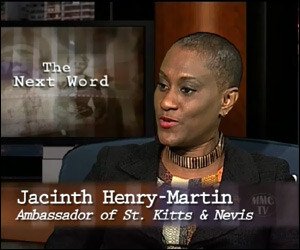 Nationals of St. Kitts and Nevis were encouraged to seize every opportunity afforded by international organizations.

In an exclusive interview with SKNIS, Permanent Representative of St. Kitts and Nevis to the Organization of American States (OAS) Her Excellency Jacinth Henry ““ Martin reached out to citizens of the Federation and encouraged them to explore all avenues regarding their career paths.

“I want to say to nationals, in particular the young people of St. Kitts and Nevis to familiarize yourselves with the work of the OAS,” Her Excellency said. “It is important to all of us (Kittitians and Nevisians) as citizens of this hemisphere to get acquainted with the works of all international organizations, in particular those in which the Federation is represented fully by resident ambassadors.”

Ambassador Martin praised the OAS, especially for their work done in St. Kitts and Nevis.

The OAS has supported St. Kitts and Nevis in a number of initiatives in the areas of education, drug prevention and treatment, tourism, security and disaster management. Some of these initiatives includes: Capacity Building- Tourism Training and Certification Project, Anger Management and Conflict Resolution Programme in Schools and Strengthening Official Data Collection process on Crime and Judicial Systems through a Network of Public Security Official Data Coordinator (PSODC).

She further stated how proud she is that St. Kitts and Nevis is a part of an organization with a recent chairmanship.

Ambassador Martin recently served as the chairperson for the Permanent Mission of the OAS. She served for a period of 3 months before handing over the position to member state St. Lucia.

St. Kitts and Nevis is set to host the Model OAS General Assembly from March 24-26, 2015, making it the first country in the Caribbean to host the inaugural.