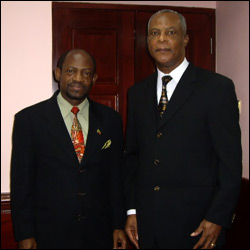 Appointed to the post in April this year, the Nevisian-born jurist presentation will be on “Pride, Development, Progress ““ Independence, 25 Years of Success” ““ the theme for this year’s Silver Anniversary of nationhood.

The lecture will be presented at the Sir Cecil Jacobs Auditorium at the Eastern Caribbean Central Bank (ECCB) at 8 P.M. on Wednesday 17th September 2008.

Chief Justice Rawlins rose through the ranks of the Eastern Caribbean Supreme Court. He joined the Court as one of the first two Masters in 2000, serving also as a High Court judge with responsibility for Antigua and Barbuda, Dominica and the British Virgin Islands.

He was also appointed a Court of Appeal judge before his elevation to the top post within the OECS judiciary.

Rawlins has also served as chairman of the Eastern Caribbean Supreme Court’s Judicial Ethics Committee and the Judicial Education Institute.

In 1985, he acquired a Legal Education Certificate from the Norman Manley Law School in Jamaica, following which he was called to the Bar in his native St. Kitts and Nevis.

He also studied at The Hague Academy of International Law in the Netherlands and the Institute of Advanced Legal Studies at the University of London.

Prior to joining the Court, Rawlins served in the public sector and was a lecturer at the Cave Hill campus of the UWI.

He has co-authored several papers that have been published in regional and international law publications.