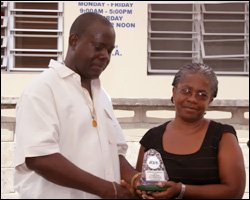 The agriculture community on Nevis received public commendation on Friday as four persons in the sector were awarded for their contribution to the overall development of agriculture on Nevis.

The recognition was given by Minister of Agriculture in the Nevis Island Administration Hon. Robelto Hector, in a small ceremony in collaboration with the Food and Agriculture Organisation (FAO), to mark World Food Day 2009, under the theme “Achieving Food Security in Times of Crisis”.

Mr. Hector explained that his Ministry together with the island’s farmers had the responsibility to ensure maximum food security for citizens. A task, he said, that had become more acute, given the global crisis of lower food production and spiralling food prices.

He explained that much of the global crisis was blamed on changing weather patterns and the dramatic cost of fossil fuels, factors beyond their control.

However, for Nevis that situation was compounded by land availability and tenure, farm credit and the rising cost of petroleum based inputs (fertiliser, chemicals), storage and marketing of produce (local and regional)animal pests control.

Notwithstanding, Mr. Hector said his Ministry had moved expeditiously to create and or enhance policy frameworks which provided other institutional support mechanisms that enhanced food security.

“Significant capital has been invested in human resource development both at the institutional and farmer/fisher level.

“Significant capital was also allocated to relocate several livestock farmers from lands previously zoned for housing. Without this intervention, an already declining livestock sector would have become even more compounded,” he said.

The Minister also noted that the Ministry of Agriculture continued to encourage the growth of the agricultural and fisheries sectors, through generous subsidies and incentives.

“Further evidence of my government’s commitment to agriculture is the recent completion of Phase I of the Agro-Processing plant at prospect. The requisite equipment has been procured to complete Phase II,” he said.

Mr. Hector further pointed to the Ministry’s efforts to get youths involved in agriculture and spoke of the agricultural education programme that was introduced at the primary school level and the twice yearly attachment programmes for secondary schools.

“The success of the potted garden projects at the two primary school – St. Thomas and Ivor Walters Primary -, sparked a keen interest in our very youngest students, precipitating further expansion of the programme to all primary schools by the end of the year. From such early intervention will come our future farmers,” he said.

The Minister used the opportunity to highlight a number of achievements for 2009 so far among them: the expansion of Cotton, onion and increased food production on government owned estates; the expansion of value added products from the Abattoir Division; expansion of the sea turtle conservation programme; increased throughout of fish and secured funds for the rehabilitation of the Charlestown Public Market.

The Agriculture Minister also pointed to the collaborations between the Ministry of Agriculture and allied agencies, which he said had yielded significant and tangible results for all stake holders.

He said the Ministry of Agriculture would continue to endeavour to diversify and increase the rate of development of agriculture, fisheries and cooperatives through effective collaboration, support and dialogue with all stakeholders at all levels.

Mr. Hector contended that it would enable sustainable livelihoods which would support the careful utilisation of natural resources both land and marine, that would result in a positive growth of the Nevis economy and by extension the Gross Domestic Product.