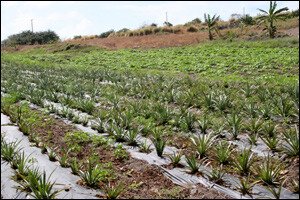 A cross section of farmers on Nevis welcomed the attention they received from top agriculture officials on Nevis on Tuesday January 21. The visit afforded them the opportunity to discuss challenges and successes specific to their areas.

Minister with responsibility for Agriculture in the Nevis Island Administration (NIA) Hon. Robelto Hector, earlier that day led the team of technical and Ministry of Agriculture staff, on a field visit to some farmers involved in large scale fruit and vegetable production for the local and export markets.

“You get a chance to interact with the farmers, know of their concerns, see them at work and you are able to make plans and projections that are pertinent and important toward their survival in this industry,” Mr. Hector told the Department of Information at the end of the field trip.

He also expressed his satisfaction with progress made in the island’s quest towards food security. The Minister pointed to the farm in Cole Hill which had ventured into hydroponics and noted that it was an area which had generated interest from regional allied agencies with regard to production in St. Kitts and Nevis under cover.

“Nevis now has two hydroponics farms and I think that’s a plus. They are exporting and St. Maarten is one of the destinations that we are exporting to. I am truly happy especially seeing how people are employed in agriculture and how we are actually dealing with our case of food security/import substitution,” he said.

Notwithstanding, Mr. Hector noted that he was hopeful agriculture would continue to play a significant role in the Nevisian society in 2009 as it had in the years before.

The Minister also spoke of the success he had seen on the farms which, in his view, was an indication of the good work done by the Agriculture Extension Officers and others employed in agriculture.

The good results in the farms both private and government owned he said, was a justifiable reason for the increased spending in agriculture.

“In our early time in government we invested a lot in equipment to assist. Now we are bearing the fruits in terms of our production and I am extremely happy,” he said.