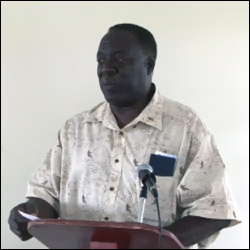 Mr. Augustine Merchant Of The IICA

The Nevis Agro Processors Cooperatives Society received of a grant of over EC$50,000 from the Canadian International Development Agency (CIDA).

Making the presentation on behalf of CIDA on Wednesday May 14, 2008 at the Department of Agriculture’s conference room at Prospect, Mr. Augustine Merchant who is also the St. Kitts and Nevis representative for the Inter-American Institute for Cooperation on Agriculture (IICA), said the agro processors would now be further on the road to success and the Canadian government should be highly commended for this effort.

“Over the past couple months, the Agro-Processors along with myself made approaches to CIDA. A proposal was drawn up requesting assistance in getting some equipment to help to furnish the facility which has been built.

“In this regard CIDA have seen some of the work that the agro processors have done and have been very impressed by the work they have been doing. They were very gracious in giving the agro-processors a grant of EC $56,583.71 and I think this is very commendable, he said.

The IICA representative who secured the grant said the international funding agency’s association with the processors dated back to 2002, when it provided some technical assistance in the form of training to for members, which was evidenced he said, in a marked improvement in the quality of products  which the agro-processors have done.

Mr. Merchant recognised that the Joseph Parry led-Administration had been working along with the processors and had constructed a building which cost over half a million dollars.  Mr. Merchant gave kudos to the government for complimenting the endeavors of the agro-processors.

“Today is a good day! A memorable day for the agro-processors and I think that we all are very happy for this.  I take this opportunity to pass on this check to the Permanent Secretary in the Ministry of Agriculture [Mr. Perlivan Wilkin] who would in turn assist the agro processors in doing what the project stipulates.

“One of the things is that we have been asked by  IICA is to assist with the implementation of the project and I think over the years the agro processors have had a good record implementing their projects and we’ll also have a successful one,” he said.

One of the requirements for accepting the grant was the signing of a contract which stipulated how the funds will be used. President of the Nevis Agro-Processors, Mrs. Alvis Dyer signed the document on behalf of the Cooperatives Society.

The grant will facilitate the purchase of appliances and other equipment to be used for the provision of training in food safety, technology, and good agricultural practices.

Agro-processors from across the country were in attendance to witness the ceremony.