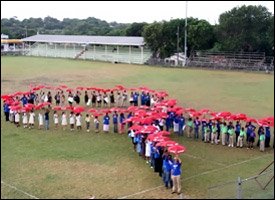 Inclement weather did not derail the efforts of the HIV/AIDS Unit on Nevis to mark the 20th anniversary of World Aids Day on Monday December 1. The march through the streets of Charlestown to Grove Park went ahead as planned with students, health personnel and private citizens under the theme “Stop AIDS Keep the Promise: Lead Empower Deliver”.

During a brief ceremony, Minister of Health in the Nevis Island Administration (NIA) Hon. Hensley Daniel said despite the public’s substantial knowledge on how the disease was contracted and its danger, their behaviour was lacking.

He expressed the hope that that the gap between the knowledge of HIV/AIDS and behaviour could be bridged which would in time, reduce its incidence on the island.

The Health Minister pointed to the cost of treatment for HIV/AIDS patients which he described as a significant amount of money that could be used for other things.

He warned that the responsibility to control the spread of AIDS rested with every individual for the protection of their family and community. An increase in the incidence of HIV/AIDS Mr. Daniel said would be felt in the pockets.

Acting Permanent Secretary in the Ministry of Health and Health Planner Mrs. Nicole Slack-Liburd said the NIA had led the way when it established the HIV/AIDS Unit which was guided by a National Strategic Plan for HIV/AIDS.

She said though much had been accomplished, the battle was far from over. The island still averaged three new cases of HIV/AIDS per year and 14 individuals continued to access care and treatment services.

Mrs. Slack-Liburd noted that there should be no shortage of leaders to fight the disease.

“Let us accelerate our response to the disease by searching for the leader within each and every one of us. It is our civic duty to empower ourselves so we can be delivered from the scourge of the disease,” she said.

The 2007 and 2008 World AIDS Day theme which promotes leadership, builds on the 2006 theme of accountability. Mrs. Slack-Liburd said Leadership highlighted the discrepancy between the commitments that had been made to halt the spread of AIDS and actions taken to follow them through.

Before the ceremony, a formation which depicted the red ribbon, the symbol for HIV, was made with the 200 persons who took part in the march. They hoisted red umbrellas written “KEEP THE PROMISE” and “STOP AIDS”.

The 200 number represented the amount of persons who had tested positive in the Federation up till the end of 2007.