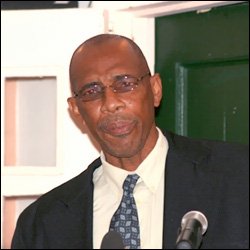 Head of the Nevis Police Division Superintendent Samuel Seabrookes issued a passionate call to the Nevisian public to come forward with information that would help to solve crimes and greatly reduce the cost of processing matters for the courts.

Mr. Seabrookes’ call came while he presented an overview of the Division at the 7th annual Police Constables Appreciation Awards Ceremony 2010 at the Old Manor Hotel on Saturday.

He said crime was a global occurrence which affected everyone but because it was the duty of Police to prevent and detect crime, members of the public expected from them successful delivery all times and that thinking was no different in the Federation.

However, Mr. Seabrookes contends that given the constraints faced by small island nations like St. Kitts and Nevis, the rate of success in crime fighting could not be comparable with bigger countries that had greater resources available to them.

“Unlike the Federal Bureau of Investigations (FBI) in the United States and Scotland Yard in the United Kingdom, we are a small nation that does not have the Forensic methods and high tech resources to fight crimes. Our scarce resources leave us at a disadvantage.

“Here is where we depend heavily on the community to assist in whatever way we can. With little assistance from them, especially when they have information, reluctant to pass on such and is unwilling to testify at Court for whatever reason, the alternative is to turn to Forensic Science,” he said.

Notwithstanding, Superintendent Seabrookes said while DNA had been used in a number of successful cases it is an expensive undertaking.

“We once had access to labs in Jamaica and Barbados but because of their country’s demand they no longer accommodate us.

“As a result we have been forced to use a private lab in Florida – DNA International, which proved to be very costly. A simple case can cost between US$10,000 and $15,000 for the examination plus US$2,000 for each Court appearance of the scientist to give evidence in a matter. This does not include air travel and accommodation,” he said.

However, he pointed to the impending assistance from a number of close circuit television cameras that would be installed on the island which he said would enhance the crime fighting capability of the police greatly.