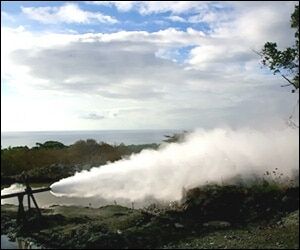 In January 2018, Nevis is expected to take a huge step in claiming the title as the “Greenest Place on Planet Earth.”

Nevis’ Deputy Premier, Honourable Mark Brantley, made this disclosure while giving an update in the production of geothermal energy on the most recent edition of the Government’s radio programme “Working for You.”

“It is an initiative that we (Nevis) embarked on some 10 years ago,” Minister Brantley stated, adding that the project is definitely worthwhile. “We finally got to a point where we can say to the public that based on the agreements entered into, the geothermal plant should be completed by December 2017.”

In commenting on the cost, Minister Brantley said that the developers are responsible for raising the necessary capital to implement the project. They are also responsible for harnessing the resource and building the infrastructure to transfer the energy to the national grid. When that transfer takes place, consumers should see a dramatic change in their electricity bills.

“The maintenance, running, day-to-day cost are not costly,” the deputy premier stated, citing operating projections. “In fact, based on current forecasts [for] geothermal energy, the public in Nevis is likely to see its energy bills drop by as much as 50 percent based on current costing and that is bearing in mind that oil prices are at historic lows.”

“When oil prices, and notice I didn’t say if,” Minister Brantley continued, “When oil prices start to go back up and they start to creep up to those dangerous levels of  $100 and $100 plus (United States currency) per barrel, I think that is when the benefit of clean, green, renewable energy will come magnificently to the fore.”

The developers have indicated that the geothermal plant should produce enough energy to supply the needs of Nevis, its sister island St. Kitts and other neighboring islands, he said.

“So it means that Nevis can potentially become a net exporter of energy,” Honourable Brantley stressed, noting that this will help to diversify the economy which is now largely dependent on tourism.

Word of the development has caught the attention of international media, spurred in part by efforts of nations to address climate change as a result of the COP21 conference in Paris last November.

During a recent visit to the United States, Deputy Premier Brantley participated in television interviews with nine separate stations. He was also engaged by travel and print media persons. This provided an ideal forum to make the case for the connection currently being forged between energy security, green energy, and tourism.

“Our tourism plant [will] become immediately cheaper to operate,” he stated. “And the type of clientele that both St. Kitts and Nevis are seeking to attract are the clientele that want to come to a place that is clean and green and sustainable.”

Brantley said these efforts signal Government’s serious commitment to protect the environment and ensure that the charm and natural beauty of St. Kitts and Nevis can be enjoyed for generations to come.