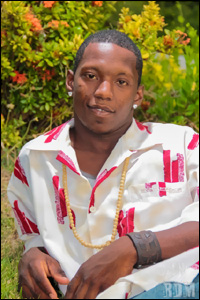 Reece Velton Walters was born in the beautiful island of Queen City, Nevis on February 19, 1993 and grew up in the historic village of Cotton Ground.  He is the son of Jasmine Walters and John Nisbett.

Reece received his primary school education at the St. Thomas’ Primary School. Thereafter, he transferred to the Charlestown Secondary School to pursue his secondary education where he graduated in 2010.

Since he was a student, he had a passion for sports. Reece was a top athlete during his high school career due to his love for track and field.  He also enjoys basketball and football.  Reece now has a love for body building which he takes very seriously.

This 19 year old is currently employed at the Four Seasons Resort.  He is well-liked by co-workers and guests because of his outstanding personality.

Reece is very energetic, friendly, determined and ambitious.  He hopes to become a successful entrepreneur one day.  His favorite quote is “Every great dream begins with a dreamer.  Always remember, you have, within you, the strength, the patience and the passion to reach for the stars to change the world.”  Reece believes that anything is possible once one puts their mind to it.

By entering this year’s Mr. Kool Contest, Reece hopes to serve as a positive influence to other young men in his community and to show that they too can become role models.

You are invited to the Nevis Cultural Complex on Sunday 29th July 2012 to see Reece Walters vie for the 2012 Mr. Kool title.