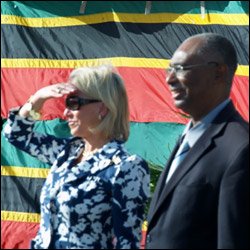 The Premier of Nevis, the Hon. Joseph Parry and Her Excellency, Mary Ourisman, the United States Ambassador to Barbados and the Eastern Caribbean, unveiled the  new name of the Nevis Disaster Management Facility at Long Point on Thursday afternoon.

The name of the facility was revealed as the, Llewellyn Newton Disaster Management Facility.

During the ceremony, Premier Parry reminisced about his role as the First National Co-coordinator of Disaster Preparedness. He informed the audience that Mr. Llewellyn Newton was his able assistant.

“In those humble days it was just Mr. Newton and I who worked without an office, equipment or headquarters. Over the years Mr. Newton worked very hard to build a facility on the island of Nevis. He worked with CEDERA,St. Kitts and the Regional Police Forces and organizations. He was not afraid to ask, to seek assistance or beg and now out of these efforts, we have this building opened by the U.S ambassador today,” Premier Parry said.

The Premier also complimented Mr. Newton for his hard work and creativity. He commended Mr. Newton’s ingenuity when he explained that his former assistant organized mock exercises and other drills imitating what could be potential disasters. He said that Mr. Newton was always willing to assist with the training of persons, so they would be ready for action, in case of emergencies.

The cost of the project is in excess of EC$1.5 million, provided by the U.S Government, while the Nevis Island Administration has provided an additional EC$1 million to cover mainly external works which include drainage, a parking lot, access roads, fencing security, emergency systems, landscaping and more.

Meanwhile, Her Excellency Mrs. Ourisman pledged the U.S governments support and commitment to provide assistance to the island, where needed.