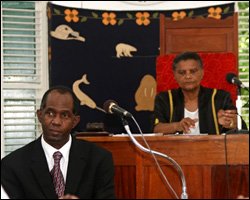 The Nevis Island Administration’s (NIA) Ministry of Trade moved to making life easier for importers and exporters on Nevis with the establishment of an Import and Export Unit. The new division is located at the Long Point Port.

Permanent Secretary in the Ministry of Trade Mr. Dwight Morton made the announcement of the new facility when he spoke to the Department of Information on March 07, 2012 at his Government Road Office.

“The Import and Export Unit is now at the Long Point Facility. We had a small part of that which was at the Supply Office so anyone who wanted to import or export had to go to the Supply Office and apply for an import or export licence. In very many cases, that was inconvenient [with] the importer having to leave Long Point and go down to Pinneys to get an import licence.

“Now we have the facility at the Port right next to Customs so anybody who wants to import, who needs an import licence, can go to the Long Point facility ask for the Import and Export Unit and pay the usual one dollar and get their import or export licence,” he said.

Apart from the convenience, Mr. Morton explained the importance of the new Unit since it was a requirement by law that importers and exporters had the proper authorisation.

“What we are saying is, an individual brings in a television without a licence, when they go to Customs before they can have their entry passed, they would have to go next door get the import licence even after the item has been imported and only then would they be able to clear the item from the Customs,” he said.

In addition, data collection was another matter the new unit would facilitate and according to Mr. Morton, statistics in the area of items imported and exported out of Nevis had been lacking.

“Therefore, this Unit will go a long way towards providing the necessary data which will become very vital and critical to help the Government determine and find out exactly the quantity, volume and value of goods being imported and exported from the country,” he said.

However, the Permanent Secretary said the new facility was in line with the Ministry’s attempt to give full effect to the portfolios of the Ministry of Trade which included Industry, Consumer Affairs, Import and Export Control.

Mr. Morton said two years ago the Ministry had also put in place a Consumer Affairs Unit at the Levi E. Morton Building at Pinneys which housed the Supply Office.

“The Consumer Affairs Unit is responsible for looking after the rights and protection of consumers and that is something that is almost complete. Actually its work is progressing smoothly as consumers have testified to the work in terms of informing them and providing them with the necessary protection which they probably were not aware was available to them by law,” he said.