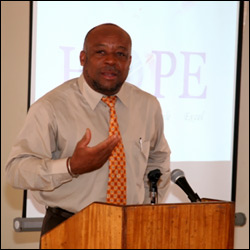 There is a need to change the course of history and to have the society make a difference. That was the view of Minister with responsibility for Social Transformation on Nevis Hon. Hensley Daniel, which he expressed at a ceremony of the Social Development Department on Nevis, to honour a “special breed” of 13 fathers in celebration of Fathers day 2008. The event was held on June 12, 2008 at Ministry of Trade’s conference room in Charlestown.

Sixty two years later, Mr. Daniel said, the report held true today as it was in 1945 when it was commissioned.

“So we need to change the course of history and we need to have our society making a difference. It cannot be that since the Moyne Commission say so in 1945, sixty two years later, let another Commission say the same thing. We have to make a change.

“This community needs fathers who use their influence at the right times for the right reasons, who take a little greater share of the blame and a little smaller share of the credit, who lead themselves successfully before attempting to lead others, who continue to search for the best answer  not the familiar one, who add value to their family, who work for the benefit of their children and not for personal gain, who handle themselves with their heads and their children with their hearts, who know the way go the way and show the way, who inspire and motivate rather than intimidate and manipulate, who live with their children to know their problems and live with God in order to solve them, who realise that their dispositions are more important than their position, who mold opinions rather than following opinion polls, who understand that the home is a reflection of their character,” he said.

The Minister contended too, that the community needed fathers who never placed themselves above their children, except when they carried out responsibilities; who would be honest in small things as in great things, who disciplined themselves so that they would not be disciplined by others; who encountered setbacks and turned them into comebacks and who followed a moral compass that pointed in the right direction regardless of the trends.

The Moyne Commission came into being as a result of disturbances in the 1930s in the British Territories in the Caribbean. The British Government appointed the West Indian Royal Commission on 5 August 1938 to investigate and to make recommendations on the social and economic conditions in the various territories. The Commission was led by Lord Moyne (the former Walter Edward Guinness) and among its members was Sir Walter Citrine, General Secretary of the British Trades Union Congress.

Even though the Commission completed its report in 1940, the British Government did not release it to the public until July 1945 after World War II ended.

The Moyne Commission exposed the horrible conditions under which people of the British Caribbean lived. It pointed to the deficiencies in the education system, and economic and social problems of unemployment and juvenile delinquency. It also sharply criticised the poor health conditions and expressed concern over the high infant mortality rate.