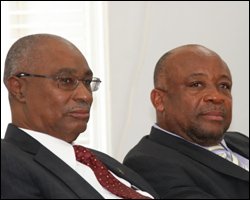 Doing nothing to cope with the global recession was not an option for the Nevis Island Administration (NIA).

Premier of Nevis and Minister of Finance on Nevis Hon. Joseph Parry, made that announcement while he outlined the steps the NIA had taken to stimulate the economy in 2010, when he delivered the Budget Address at the Nevis Island Assembly on Wednesday.

“Doing nothing is not an option for this government. While we have worked diligently to control current expenditure, we have carefully included projects in the capital budget that will generate jobs and increase incomes,” he said.

Mr. Parry explained that in addition to funding from internal resources and the Caribbean Development Bank, the NIA borrowed over $10million from Social Security to undertake a stimulus programme.

“Some projects have already started and others will be implemented during 2010. The projects include the purchase of land and construction of the Cotton Ground Police Station at $1.2million; repairs to the old police station $150,000; construction of the Labour Department office $250,000, Farm Machinery for agriculture $30,000; upgrade of the Charlestown Public Market $295,000; Sea Island Cotton production $100,000; expansion and upgrade of the Veterinary Clinic $125,000; upgrade of CARDI Building $150,000,” he said.

Other projects Mr. Parry listed that were budgeted for included the expansion and upgrade of the Cotton Ground Health centre $450,000, New River Estate Museum Project $79,423; Maritime Museum project $200,000; upgrade of the Charlestown, VOJN and Ivor Walters Primary Schools at a cost of $998,821; computerisation of schools $500,000; renovation to Gingerland Secondary School $205,000; expansion of Charlestown Secondary School $1,000,000; purchase of land and upgrade of Cotton Ground playfield $700,000 and the construction of community centres for the communities of Camps, Fountain, Jessups, Charlestown and Cotton Ground at a cost of $2,762,300.

Mr. Parry contended that though the projects were small, they would go a long way in the alleviation of unemployment until the island’s economy recovered.