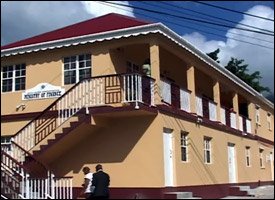 The Nevis Island Administration (NIA) officially commissioned a new Building Complex that would accommodate the Ministry of Finance and Legal Department.

In his remarks at the ceremony, Premier Parry offered words of satisfaction and commendation to the project contractor Mr. Keithly Tross and his team.

“Mr. Tross, I really appreciate your craftsmanship, the talent that you have for construction and we look forward to continuing to work with you in the future,” Minister Parry said.

He also recorded his gratitude to the staff at both departments but particularly to Legal Advisor Nisbett for his instrumentality in the running of the Legal Department this year.

“This building houses two major ministries; the Ministry of Finance and the Legal Department and it is obvious that as the government grows, as the country grows these departments keep expanding and that is expected.  I believe that I can congratulate both departments for doing an excellent job in this 2008.  They really have worked hard.

“I will speak of Hon. Patrice Nisbett because he sits in the Federal Parliament and he is in charge of the Legal Department and we have put a lot of strain on him this year, lots of projects, bits of legislation that he has to undertake,” Premier Parry said.

Advisor Nisbett also used the opportunity to record his elation at the building’s refurbishment.

“On the surface, this state of the art building was designed to make us more efficient in carrying out our duties and to help us [be] better able to process and disseminate information in an effective and efficient manner and to ensure that we who safeguard the public trust do so in a place and an environment that would allow us to give only our best to the building of this great island of Nevis,” Nisbett said.

He also spoke of improvements in the level of service that his department was able to offer as a result of the upgrade of the facilities.

“It is important that we have the right tools to carry out our duties and the improvement to this building has provided us with those tools.

“I believe as a result of the improvement in the law library we would have more thorough and detailed research and thus allowing us as lawyers to make better, informed and sound decisions,” Nisbett said.

He added that the upgrade in facilities meant far more than improving the building’s aesthetic appeal.

“The real significance of these improvements and renovations is that this government has embarked upon its mission to preserve the cornerstone of our democracy which is our judicial and legal system.  Where many of us may see fresh paint, new chairs, big offices, what I see is the rebirth of an institution that had lapsed into mediocrity and complacency,” Nisbett said.