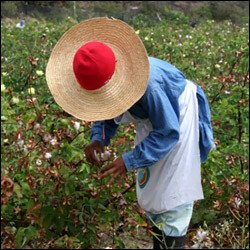 Worker Harvesting Sea Cotton On The Island Of Nevis

The export of Sea Island Cotton resumed recently on Nevis and the Department of Agriculture received US$95,000 from the  Japanese markets for 9,500 pounds of raw lint, its first sell abroad.

Minister of Agriculture in the Nevis Island Administration (NIA) Hon. Robelto Hector welcomed the export and cited that the Administration’s move to re introduce cotton cultivation in 2007 was part of its plan to diversify the economy. He said cotton was a notable foreign exchange earner.

Mr. Hector told the Department of Information on Tuesday November 11 that cotton production would have a positive effect on the island’s economy.

“Nevis is not known to have exported anything in a very long while. From the Agriculture side of things we are exporting cotton. We are [also] looking at taking our agro process produce unto the export market and the multiplier effect would be felt.

“We would be able to raise foreign exchange and truly we would be reinvest and make this opportunity much more worthwhile,” he said.

Mr. Hector used the opportunity to encourage farmers to cease the opportunity to generate money from cotton cultivation. He explained that the crop was a lucrative one on the world market there was great demand but a scarce supply.

“Cotton on the world market is presently fetching a premium price and as government benefits I would want farmers to benefit also.

“I am asking farmers in the upcoming production season to make sure you plant an acreage of cotton that is economical and one which can bring you some fortune,” he said.

Cotton production was introduced on Nevis after a five year break. Cultivation commenced in September 2007 on almost 40 acres of government lands and eight farmers had taken up the challenge to replant cotton on 10 acres of private lands.

In the past, large plots of Sea Island Cotton were grown on Nevis but was later abandoned which Permanent Secretary in the Ministry of Agriculture Dr. Kelvin Daly claimed was due to a lack of foresight and planning on the part of the authorities then.

The Agriculture Minister said it was not difficult to reintroduce cotton on Nevis and thanked those who had helped with the harvest – the most tedious part of the crop.

“We had farmers who welcomed the reintroduction of cotton and as a government I had very great support from the Department of Agriculture and from my colleagues.

“It has generated quite a bit of interest. There are some officers within the Department who had worked with cotton before and were happy to share their knowledge and expertise,” he said.