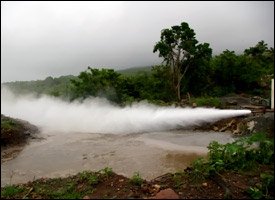 Officials of West Indies Power (WIP) have confirmed that at least two geothermal drill sites on Nevis have the capacity to produce hundreds of megawatts of geothermal energy.

The confirmation came on October 16, hours after the passage of Hurricane Omar, when WIP’s Nevis 3 well at Hamilton Estate, came alive with steam.

According to Mr. McDonald, the high temperatures at Nevis 3 at Hamilton Estate which is located at 2.5miles south of Nevis 1 at Spring Hill where steam and high temperatures were also found, confirmed the existence of a continuous geothermal reservoir between the two wells.

The NIA had given WIP the authority to explore the geothermal reservoir of the island in February 2007, in its efforts to provide cheaper electricity and reduce the cost of living for Nevisians.

Meantime, Junior Minister with responsibility for Public Utilities and the Environment Hon Carlisle Powell told the Department of Information that WIP’s latest discovery proved that the NIA was on the right track.

“Obviously we are elated as a people, as a government. We are happy for West Indies Power”¦ This really means that we are on the right road, that we will very shortly be able to produce power for the people of Nevis and this is just another in our quest to reduce the cost of living in Nevis,” Mr. Powell said.

He said once geothermal power was received it meant a reduction in the cost of electricity to consumers which was important to the government and people of Nevis.

Permanent Secretary in the Ministry responsible for Public Utilities and the Environment on Nevis Mr. Ernie Stapleton equated the discovery of geothermal energy on Nevis to that of oil and maintained that the resource would provide a cheap energy platform which would elevate Nevis’ economic development.

General Manager of WIP Mr. Rawlinson Isaac said according to the experts, WIP would be able to deliver on its promise in 2010 and believed that Nevis was better off with the discovery of the renewable resource.