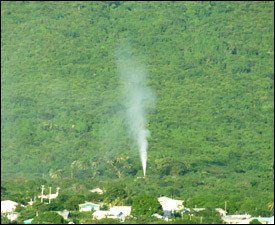 Successful Drill Hole – WAY Back in 2008

Premier of Nevis, the Hon. Joseph Parry says his administration has been able to overcome a number of hurdles as it relates to moving the geothermal project forward on the island of Nevis. He made the announcement on his return home Tuesday, May 29th, following a recent meeting (Friday, May 11) with the US Export-Import (Ex-Im) Bank in Washington, DC.

“I am pretty pleased about it,” Premier Parry told the Department of Information at the Robert L. Bradshaw Airport in St. Kitts upon his arrival from London-Gatwick aboard a British Airways passenger airliner on Tuesday afternoon.

“There is a greater awareness now by a number of very important parties, as we seek to move forward,” the Premier said.

“We have been able to overcome a number of hurdles. I do not think we will encounter similar hurdles again, and so the path is more or less getting clearer for us to advance the geothermal project.”

He pointed out that Prime Minister, the Rt. Hon Dr. Denzil Douglas, had met with EX-IM Bank a few weeks before him, along with officials from the team of advisors on the country’s debt restructuring exercise and the White Oak advisory people.

Speaking to his own meeting, the Premier said “I met with them and they mentioned a number of ways how we can advance the project very quickly,” said the Premier. “We are also working on the project from other areas, which I am not free to discuss at this time.”

In Boston, Massachusetts on Saturday, May 12, Premier Parry, who is also the Minister of Tourism, met with persons who have an interest in a project which he said hasn’t “quite taken shape as yet”, but he told the Department of Information that they are already on the island doing some investigative work.

From Boston, the Premier traveled to the British capital, and according to Premier Parry, “we spent our first six days in London where we had four meetings with two sets of potential investors, one to do with the Pinney’s Beach area, the other to do with Herbert’s Beach.” He said the meetings were geared to advancing these projects.

From London the delegation traveled to the English Midlands with the first stop being the city of Birmingham, where they held a Town Hall Meeting with Nevisians. They also traveled and met with Nevisians in similar fashion in the cities of Manchester and Leeds. On Sunday, May 27 they worshiped with the largely St. Kitts-Nevis congregation at the Roscoe Methodist Church in Leeds.

“We had extremely good meetings, where over 100 persons attended on each occasion,” said the Premier. “They are very up to date with what is going on in Nevis, they asked a number of questions, they were very happy, we really had a good time, and they treated us extremely well in all the three cities.”

He informed the Department of Information that while they have previously traveled to Birmingham and Leeds, and met with Nevisians in those cities, it was the first time they had visited Manchester, which like Birmingham and Leeds has a large concentration of nationals of St. Kitts and Nevis.

“Nevisians in Manchester were very pleased to see us on this occasion, and told us to come back soon,” said Premier Parry.

While in Leeds, the final leg of the English visit, Premier Parry heard the sad news of the passing of Nevis’s first Premier, the Hon Dr. Simeon Daniel on Sunday, May 27. Later that evening, he issued an official statement which acknowledged Dr. Daniel as the father of modern day Nevis. Tuesday, the Premier told the Department of Information that he was not in a position to comment on the funeral arrangements at that time, but would do so at a later date.

“I am not in a position to comment at this time,” said Hon. Parry. “Prime Minister the Rt. Hon Dr. Denzil Douglas and I exchanged very brief text messages, I have spoken to the wife of the deceased former Premier and by Thursday, I will have a much better picture of what we are going to do.”

Touching briefly on the matter of the missing Church Ground teenager, Dylon Clarke, Premier Parry said that he would have talked personally with Dylon’s mother, Ms. Yvette Clarke, and had been in touch with the police on a regular basis.

Dylon went missing on Saturday, April 28, and has not been seen since.