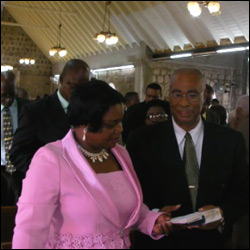 The Nevis Island Administration led by the Nevis Reformation Party, ended their Second year anniversary week of celebration with a service of Prayer and Thanksgiving at the St. Thomas’ Anglican Church on Sunday, July 13th 2008.

The afternoon service began with a procession of Clergy, Government officials and NRP executives.

Pastor Davidson Morton of the Eden Brown Church of God invoked God’s blessings on the service, while Father Alric Francis of the St. Thomas’ Anglican Church presided over the ceremony. The National Anthem was rendered beautifully on steel pan by Miss Miche’la Parris; and Pastor Sandra Flemming, of the Newcastle Wesleyan Holiness Church, offered welcome remarks and chaired the afternoon’s proceedings.

The congregation set the pace for an afternoon of thanksgiving and spiritual upliftment with its lusty singing of the first hymn, “Lead Us, Heavenly Father, Lead Us”.

Scripture readings were done by two members of the Nevis Island Administration– Junior Minister, the Hon. Carlisle Powell and Legal Adviser, Hon. Patrice Nisbett, while songs of encouragement and inspiration were performed by Kurvin Wallace and Sam Corbin.  Not to be out done, the Clifton Methodist Men’s Fellowship kept the congregation clapping and tapping, with a medley of gospel tunes.  The sharing of peace, where Cabinet members got the opportunity to greet members of the congregation, was offered through the sweet sounds of the Humming Bird String Band.

Premier Parry, on his approach to the microphone, was greeted with a thunderous round of applause from the congregation, many of whom were impeccably decked in various shades of green, symbolic of their affiliation with the Nevis Reformation Party (NRP).

“We have been in government for two years and I must say that we are proud of our achievements and our people are proud of what we have achieved!” declared Premier Parry.

He went on to make mention of two areas, which he said were posing challenges for the Nevis Island Administration– the cost of living and crime on the island.

“There are certain areas where we have very little control, such as the cost of living and crime, but we still try to take steps and tackle the problems head on. We continue to make sure there is not a food shortage like there is in other places; and we continue to subsidise certain basic foods such as rice, flour and sardines,” he said.

“On crime, this Government has done a lot to train and work with young people. I am asking all to assist the police wherever possible. The police have a job to do “¦ support them!”