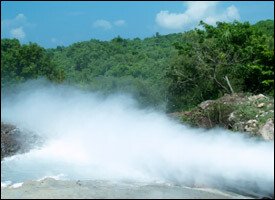 Legal Advisor to the Nevis Island Administration (NIA) Attorney Patrice Nisbett, announced recently that the NIA was in a round of negotiations with West Indies Power (Nevis) Ltd, to establish clear-cut agreements that would govern the island’s geothermal resource.

Nisbett disclosed that negotiations would be devoted to the Geothermal Resource Contract (GRC) and a Power Purchase Agreement (PPA) to be established between Nevis Electricity Company Ltd (NEVLEC) and WIP.

He further disclosed that the GRC negotiations would deal with the requisite correct licenses, in accordance with legislation passed and gazetted. He also spoke of other substantive issues to be negotiated.

“We would also deal in that agreement, with the issue of the concessions. And that concession would allow WIP to generate electricity from the geothermal resource. Also, we will deal with the issue of the Royalty Payment. We have been given specific instructions by the Cabinet of the Nevis Island Administration, with regards to dealing with the royalty payment,” Nisbett said.

The PPA, he added, would not only stipulate the relationship between WIP and NEVLEC but constructive negotiation would deal with the issue of tariff and what NEVLEC would pay for the electrical power to be supplied by WIP. He also said as the team of negotiators explore the way ahead on the issues and all the key elements are agreed upon, that the documents would not only withstand the test of time but would also bring significant benefits to the country and by extension, the people of Nevis.

Negotiations were said to be ongoing, with further information to be disclosed after negotiations concluded.