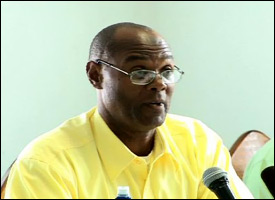 The Nevis Island Administration (NIA) through the Ministry of Social Development, launched the Community Cohesion Initiative on September 24 at the Ministry of Trade’s conference room. The programme was designed to reduce the level of anti social behaviour among youths in the community and to coordinate the development of meaningful dialogue between various communities, groups and the government.

Minister with responsibility for Social Transformation on Nevis Hon. Hensley Daniel, looked at the evidence to support the development of the programme. He stated that the Counseling Unit of the Department of Social Services had indicated that many persons who were involved with the law or conflict, their difficulties had flowed from family issues, so that type of intervention was an important step to address the situation.

Director of the programme is Mr. Abdu Kareem Ahmed who gave some insight into its establishment.

“In January, four new programmes were placed in front of the ministers specifically geared at the young adults: Self development, citizenship, anti social behaviour and speaking”¦skills. Those programmes have been developed from the specific needs and concerns that we see out there in the communities island wide.”

“The object of the Cohesion Department in Nevis is a means to explore the relationships between new and established communities in diverse neighborhoods in an effort to establish and maintain safe, peaceful and prosperous communities,” he said.

Mr. Kareem Ahmed cautioned that there was no magic formula for the programme’s success but everyone working together would help.

“Community partnerships, business partnerships, all of us working together that’s it. No magic formula, no smoking mirrors. We get up in the morning with hope in our hearts and we do our jobs. If all of us actually did our jobs it would make a significant difference, if we stop pretending we are doing our jobs, if we stop the fact that we are friendly with the minister that would make a difference,” he said.

Present at the launch were other Government officials and a number of persons from the private and public sectors and community groups.