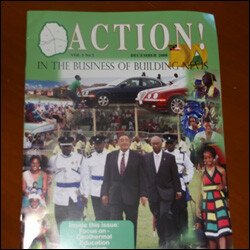 The Nevis Island Administration (NIA) is proud to announce the release of their latest edition of Action! magazine.

Presently being distributed extensively throughout Nevis, the region and internationally, the December issue of Action! magazine features an impressive lineup of public sector content including an update on Geothermal, the residents of Cox Village, Education, Tourism, the Drag Race Strip and a host of other pertinent issues, programs and projects.

“We are very pleased with the strong support that has been shown to us by Government agencies in the Nevis Public Sector. Without this support it would have been impossible to have gathered together so many great stories about Geothermal, Water and the ordinary citizens of Nevis”, said magazine editor Peter Ngunjiri. He went on to say that, Action! Magazine is strongly geared to improve the efficiency, transparency and accountability of the island’s Public Sector.

According to Publisher and Cabinet Secretary in the NIA, Mr. Ashley Farrell, the positive feedback following the soft launch in August 2008, both from readers in the Government and Private Sector has been overwhelming. He said that most agree that information on the Government service is important to chronicle what has been achieved, and to remind us how much more we are yet to achieve.

“Unlike the leadership before us, we intend to maintain a healthy balance in terms of development and to ensure that no area of Nevis is left behind in receiving assistance. In the first issue of Action! the reader observed, and rightly so, that we did not have enough space to cover all the areas, nor even all the people. So we present this second edition and as we report what we have done, we also want to give our people the opportunity to tell us what still needs to be done; because that is the internationally accepted hallmark of delivering development”, articulated Mr. Farrell.

Action! magazine can be obtained at the reception desk of the Bath Hotel or it can be sent overseas to interested persons throughout the Diaspora.  To receive copies by mail, send a self-addressed large envelope to the Press Secretary, Mrs. Deli Caines Bussue, Bath Hotel, Bath Plains, Nevis.