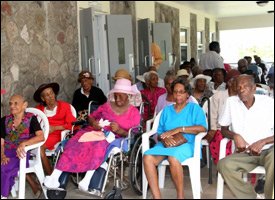 Minister of Health on Nevis Hon. Hensley Daniel said that a collective partnership between the Nevis Island Administration (NIA), the private sector and civic organisations would put the Nevis’s elderly at the center of the island’s development.

He made the comment while he delivered an address on October 6, to officially launch activities in celebration of senior citizens at the Flambouyant Nursing Home. The theme is “Our Foundation “¦ Our Role Models”.

The Minister reassured the senior citizens of the Administration’s continued support and appreciation and cited that what Nevisians had accomplished as a people was due to the efforts, hard work and diligence of the seniors.

“There are still a number of people who yearn for the good old days when manners, respect and discipline were part of the social milieux in our community. We thank the elderly people for making sure that you raised generations of people who can carry on those values for us,” he said.

Mr. Daniel also urged the public to visit the elderly, not only at nursing homes but at their private homes throughout the island, since the younger ones owed the seniors a debt of gratitude to care for them.

The Health Minister noted too, that the NIA spent a lot of money to care for the elderly because was a demonstration of appreciation for their contributions to Nevis.

He said the elderly population was increasing and the Administration had drawn up programmes geared towards the care of the elderly, to cater to the needs of an aging community.

“In 15 years time in Nevis, the elderly population is likely to double if we count by 65. So it must mean that we begin to pay attention, so that those who are going towards that end need not worry that care will be provided and care will be available,” he said.

Mr. Daniel also thanked the staff of the Home for the important work they were engaged in with the care of the elderly.

Permanent Secretary in the Ministry of Health Mrs. Jocelyn Liburd said she was pleased there was an institution on Nevis which celebrated the elderly that had rivaled many in the Caribbean.

She thanked the Home’s staff and urged the youth to gravitate toward the seniors to encourage, speak and comfort them, to learn their history and secrets.

Chief Medical Officer Dr. Cordel Rawlins said though the elderly were being celebrated, he believed it was also a celebration of the island’s foundation, without which Nevisians would not be who they were today.

Sunday was celebrated as a Spiritual Day. Tuesday will be a Health and Motivational Talk for Auxiliary Staff; Wednesday – Family and Beauty Day; Thursday – Open Day, Friday – Healthcare Workers Day; Saturday- Fashion and Hat Parade. The activities will climax on Friday October 24 with a field trip and picnic.