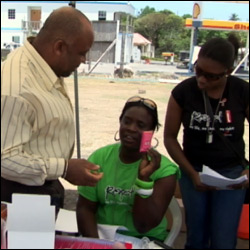 Minister of Health in the Nevis Island Administration (NIA) Hon. Hensley Daniel, stamped his approval on Voluntary Counseling and Testing (VCT) and cited that the activity hosted by the Nevis HIV/AIDS Unit in collaboration with the Ministry of Health and the Private Sector, placed the onus on individuals to know their health status.

In a televised address aired on NTV Channel 8 on June 15, 2008, the Minister said that the concept of volunteer testing spoke to individual’s inner commitment to a cause.

“This VCT approach is good since it provides an opportunity for persons to monitor on a regular basis their HIV/AIDS status: Prevention must begin before HIV prevalence grows to measurable levels.

The Minister regarded VCT as an imaginative approach to the reduction of HIV/AIDS infections and told the people of Nevis that they could all do something about the disease if they used the approach of the legal profession ““ innocent until proven guilty (Positive until proven negative).

Mr. Daniel further noted that Voluntary Testing and Counseling was an essential link between HIV prevention, HIV care and HIV support. It promoted and sustained behaviour change and linked to interventions to prevent mother-to-child transmission, prevent sexually transmitted diseases and other opportunistic infections.

He also said that it facilitated early referral to comprehensive clinical and community based prevention and care services and it improved the quality of life and helped to reduce stigma and discrimination.

“VCT is a major plank in the expanded and comprehensive response of the HIV/AIDS Unit and it is done in collaboration with various stake holders,’ he said.

Mr. Daniel expressed gratitude to the event sponsors and stated that the wide range of sponsors was indicative that HIV/AIDS had generated concern and had been given a sharp response by the community.

He said the public should treat VCT Day with a measure of seriousness and would therefore ask the HIV/AIDS Unit to make the event an annual one.

“I want all of us to treat this day seriously. I will ask the HIV/AIDS Unit to make it an annual event. VCT seeks to obtain equality and equal access for all people who require VCT services and aims for sustainable services with a focus on health impact,” he said.

Notwithstanding, Mr. Daniel continued to underscore the need for abstinence.

“We ought to pay attention to abstinence, nothing is wrong with abstinence from sex. It is still the safest way to prevent HIV/AIDS. Behaviour change is necessary and this must be reflected in the reduction of sexual partners so as to reduce the risk of contracting HIV/AIDS,” he said.

At present the NIA has to spend $4,000 per person monthly on treatment for persons with the disease.

Meantime, Acting Health Planner and HIV/AIDS Coordinator on Nevis Mrs. Nicole Slack-Liburd told the Department of Information on June 16, 2008, that VCT Day themed “Take the test take control” and “Men know your status; protect you, protect me protect us” had been successful.

“It went very well and we did 69 tests. We would like to do it every quarter but that would depend on sponsorship,” she said.

According to Mrs. Liburd, the event would require sponsorship of $8,000 per event.