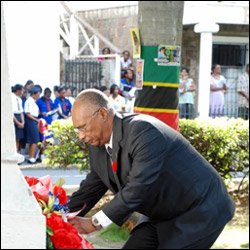 Nevis remembers those who passed at the War Memorial in Charlestown, to mark the start of the two-minutes of Silence in remembrance of those who lost their lives in World War I and II.

Deputy Governor General, Hon. Eustace John, Premier of Nevis, the Hon. Joseph Parry, Ministers and Advisors in the Nevis Island Administration and Civil Servants were joined by the armed units that included members of the Nevis Cadet Corps and Royal St. Christopher and Nevis Police Force. The Unarmed units included in the ceremonial parade were the Girl Guides, Scouts, Students from the primary and secondary schools as well as other organizations who took part in the laying of wreaths.

Numerous onlookers and participants wore poppies as a symbol for Remembrance Day. The wearing of the poppy started as a fund-raiser for children orphaned by War and as an International symbol for those who died in the wars.

During the ceremony, Father Ernest Fleming of the St. Paul’s Anglican Church led the service.  Mrs. Clara Walters of the Nevis Christian Council announced the names of the fallen soldiers, numbering twenty from World War I and six from World War II.

Musical selections were rendered by the Nevis Symphonic band and the Seventh Day- Adventist Band.

Originally called Armistice Day, it was renamed Remembrance Day, after the end of the Second World War.  Remembrance Sunday, is observed on the second Sunday in November.  Services are held in Nevis and throughout the Commonwealth annually.