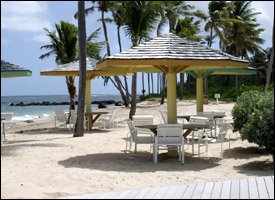 Nevis was recently rated among the top three destinations in the Caribbean and the Atlantic by a CondÃ© Nast reader’s poll. Premier of Nevis, the Hon. Joseph Parry revealed the good news on Tuesday during his weekly radio show “In Touch with the Premier” on the local radio station ,Choice 105.3FM.

The Hon. Joseph Parry took the opportunity to commend all workers in the Tourism Sector on Nevis and also personally thanked those who had made enormous contributions to the island’s major industry.

“I would like to thank the officers of the Ministry of Tourism, the Nevis Tourism Authority and the leaders and Pioneers in the area of Tourism in Nevis, Mr. Rawlinson Issac of the Sea- Bridge [ferry service], Mr. Greg Hardtman for project building and Mr. Deon Daniel for property development,” said Mr. Parry.

The Premier noted that Tourism continued to be a major sector in Nevis and it must be taken seriously and professionally by all involved.

Nevis’ top ranking in the Readers Choice Award should be used in future marketing initiatives and for promotions and marketing of the destination,” said the Premier.

According to a release by the Ministry of Tourism, The Travelers Readers Choice Awards were held at the Edison ballroom in New York City in mid- October.

The magazine’s readership voted on the best luxury vacation spots around the globe, giving awards and accolades to the top resorts, cruises islands and hotels.

Every year since 1988, a select sample of CondÃ© Nast readers have taken the readers Choice Survey.  The questionnaire was available to all readers through a secure website, then they were tabulated by Global Market institute Inc of Boston, USA.

Among the other destinations ranking in the top three with Nevis, were Bermuda and St. John in the U.S Virgin Islands.