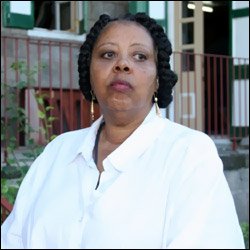 Travel columnist for the Philadelphia Sun Newspaper ReneÃ© Gordon said she was pleased with the abundance of historical sites on Nevis during her visit last Friday (December 19).

The United States newspaper, which was also available on the World Wide Web, featured articles on destinations throughout the world.

In an interview with NTV staff, Gordon said it was her plan to feature the federation of St. Kitts – Nevis in her column “Smooth Traveler” which would also be available online at http://www.philasun.com/travel.html

According to Gordon, her columns depict the culture and heritage of various countries and she wanted to do the same in her column about St. Kitts – Nevis.  She underpinned the reason for her visit to the twin island federation.

“I have found that ground zero is the islands of St. Kitts and Nevis.  I began this journey six days ago in St. Kitts and in travelling through St. Kitts I discovered that you just absolutely cannot know anything about the African Diaspora heritage without making a stop in Nevis,” Gordon said.

She also used the opportunity to highlight the exciting aspects of her one-day trip to Nevis.

“I had a fantastic opportunity to speak with curator of the museum and with several of the guides and they added a lot to information that I had.

“They added the small things that really make the history come alive for people,” Gordon said.

The article was expected to be available in six to eight weeks according to Gordon.