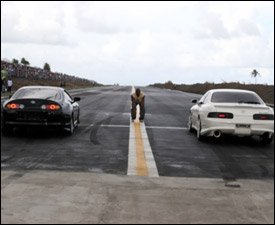 Young persons interested in the sport of drag racing on Nevis will be given the opportunity to receive training. Minister of Youth and Sports in the Nevis Island Administration (NIA) Hon. Hensley Daniel made the disclosure at the second prize giving ceremony for dragsters held recently in Charlestown.

“We have identified some opportunities for training and exposure with the regional associations, with international associations and the aim is to make sure that we have a state of the art facility and management in Nevis,” he said.

Mr. Daniel registered the NIA’s gratitude to the racers for their interest in the sport. He also noted that the establishment of the drag racing facility at Butlers was an indication of a government which listened to the island’s young population who wanted to diversify the entertainment mix on Nevis.

Since the facility’s first drag racing event on September 19, the Minister said that a Drag Racing Unit had been put in place to deal with the operations at the track.

He reminded the Nevis Drag Racing Association that the Administration could not accomplish its goals alone and needed their continued alliance. He said that it afforded the Ministry of Sports a golden opportunity to work hand in hand with Association.

“We are happy as a government to be able to facilitate the aspirations of a large section of young people”¦I look forward to working with the Association to ensure continued success,” he said.

Mr. Daniel noted too the growing interest in the sport of drag racing which he said had captured the interest of the island’s senior citizens and interests in the region.

He cautioned the Association’s members that there would be differences along the way but they should not be deterred but continue to work with the NIA for sustained improvement of the sport for the community and racers.