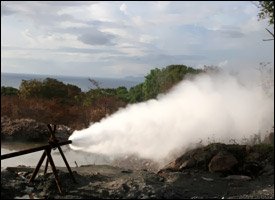 The Nevis Island Administration (NIA) has had another successful and productive round of discussions with West Indies Power Limited (WIP) on matters related to the development of geothermal energy on the island.

In an interview with the Department of Information on December 5, Junior Minister of Communications and Works Hon. Carlisle Powell said the Administration was of the view that negotiations were nearing conclusion and both parties were close to finalizing the contract [Power Purchase Agreement].

“The broad terms have been agreed on and so as a result of that the West Indies Power Limited have indicated to us [NIA] that they are available for the second round of negotiations and they have proposed dates in the middle of December,” he said.

The Minister explained that the NIA was ensuring that all the members of its team international participants included would be available to come to Nevis to sit down and hopefully discussions would be finalised then.

Notwithstanding, Mr. Powell said though he would have liked to release some of the benefits to the people of Nevis entailed in the Agreement, it would be ill advised to do so until the negotiations were completed.

“When the news breaks as to what the terms are and what the agreements are and how the people of Nevis will benefit, I am sure that [they] will again applaud this NRP government for negotiating skillfully and bringing to [them] benefits not only in terms of cheaper energy but in terms of the added social benefits that we [NIA] will get for [them] in a resource which is Nevisian that will continue to belong to the people of Nevis,” he said.

Negotiations had commenced recently to establish clear-cut agreements that would govern the island’s geothermal resource.

The negotiations have been devoted to the Geothermal Resource Contract (GRC) and a Power Purchase Agreement (PPA) to be established between Nevis Electricity Company Ltd (NEVLEC) and WIP.