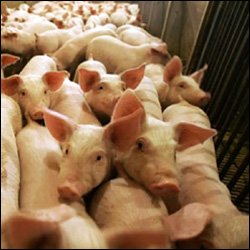 No Virus Outbreaks On Nevis As Of Yet

Two weeks after an alert was issued by the World Health Organization (WHO) with regard to the new influenza virus Type A H1N1 (Swine Flu Virus). Nevis and St. Kitts and Nevis has registered no suspected or confirmed cases of Swine Flu but Health Minister in the Nevis Island Administration (NIA) Hon. Hensley Daniel said the island continued its vigilance and had put measures in place to protect residents.

In a recent media briefing, Mr. Daniel explained that the Health authorities had recognised that the interaction, close collaboration and meeting of people provided an opportunity for transmission and surveillance continued at the ports of entry and public and private health facilities.

“At our ports of entry, the sea ports long Point and  Charlestown and [at the airport in] Newcastle, we have established quarantine rooms that have been equipped with cots and bio hazard suits so some persons returning to Nevis from areas where there has been an outbreak of the influenza can immediately be screened by us. I think I should let the public know that”

“I think also it is important for us to know that they are establishing a fever room at the Alexandra Hospital so if you go there with a fever, you can be isolated from other persons. We are in the process of establishing a hotline where you can do telephone triaging on the hotlines if you feel unnecessarily threatened by fever and so you can make that call,” he said.

The Minister also spoke of the efforts by the Health Promotion Unit which had engaged in a number of public education activities geared toward Parent Teachers Associations. They have also done some flyers which reminded the public of basic preventative measures.

He said too, that the relevant departments of the Ministry of Health had been meeting and all the sectors had been mobilised.

Mr. Daniel noted that Nevis was not removed from health organisations that managed and monitored health services and delivery in the region.

“We are part of a network which includes the Caribbean Epidemiology Centre (CAREC), the Pan American Health Organization (PAHO) which is the Latin American and Caribbean arm of the World Health Organisation so that we are not in a way fractured or isolated from the institutions,” he said.

The Health Minister also disclosed that sufficient anti viral drugs for 12, 500 people over a five day period had been ordered by the Federation’s Chief Medical Officer Dr. Patrick Martin for quick action in the event of a swine flu outbreak.

Notwithstanding, while he continued to reassure the public that there was no need for panic, Mr. Daniel said the need for continued basic hygiene practices was important.

“Wash hands carefully and completely before meals, after meals, before using the bathroom and after, so that in the end the observance of these basic hygienic practices will ensure a greater difficulty of transmission among the population.

“The children at school are particularly vulnerable in the event of an outbreak of this nature and we want to urge the staff and students to exercise as such caution as possible in ensuring that you observe basic hygiene practices,” he said.