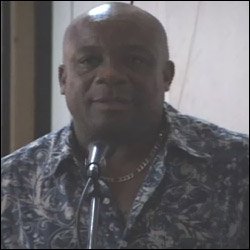 Minister of Social Development and Culture in the Nevis Island Administration (NIA) Hon. Hensley Daniel had high praise for the Rhythmz Dance Theatre on Friday December 26th when they hosted a benefit dance production at the Nevis Cultural Centre in honour of former teacher Mrs. Maureen Adams. In his welcome remarks, Minister Daniel thanked the audience for supporting the event.

“I want to thank you on behalf of all those institutions; the Foundation and Rhythmz Dance Theatre for finding the time to come to celebrate with the dance movement and also to show your appreciation for the work of Mrs. Maureen Adams.

Minister Daniel highlighted that the Ministry of Culture had appointed the former teacher to serve as a board member of the Nevis Cultural Development Foundation but due to illness she had been unable to fulfill her role.

He also expressed joy in seeing Mrs. Adams at the production and made many positive remarks about her character.

“I want also to say that we are happy that Mrs. Adams has the strength and the will to come to be part of the dance exposÃ© and that is a testimony to her great strength and her willingness to be part of, and her whole spirit of this larger than life approach to life,” he said.

Among those present at the Dance production were Minister of Culture in the Nevis Island Administration (NIA) Hon. Hensley Daniel, Advisor to the Premier Mr. Llewellyn Parris, teachers, parents and students.

The production, entitled “It’s Dancing Time Again ““ Show Some Love,” featured a variety of dances including gospel, soca, cultural and dancehall and was crafted under the leadership of choreographer Dianne Hobson and Manager Sharon Hobson.

The group consisted of vibrant young people who together aimed to promote positive interaction, provide self-esteem and promote the island’s culture.