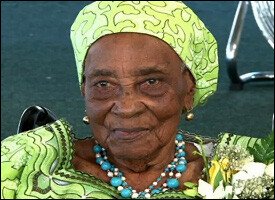 Mrs. Amabelle Alexandra Hobson of the Monkey Hill area in Butlers Village affectionately known as “Doll” and “Tappa” became Nevis’ latest centenarian on Saturday. She was honoured by Minister of Social Development Hon. Hensley Daniel, who presented her with a plaque in recognition of her 100th birthday milestone, at a birthday party at Occasions in Pinneys.

“It is absolutely awesome to be standing in the presence of someone who is 100 years of age. We have to be thankful for her life.

Mrs. Hobson is one of three living centenarians on Nevis.

The Minister underscored the Nevis Island Administration’ continued care for the island’ elderly and pointed to a Division within the Ministry of Social Development that was solely responsible for their care and wellbeing.

Mr. Daniel explained that the Administration regard the care of the aged and the status of the elderly as a good indicator of the quality of life of all of Nevisians people and the quality of the government’ humanness.

“The way we treat our older people is a clear indication of the kind of society we are and I think I can [say] both in St. Kitts and in Nevis the level of attention given to our elderly suggests that we are a caring community but I have to add quickly, that we have to continue to do it and we have to insist that our young people also aught to do it,” he said.

According to Mrs. Hobson’ daughter Mrs. Puretta Wilkin, Her mother was born on February 08, 1909 the same year in which Government House was built at Bath Plains. She was the fifth of six girls born to Walter and Agnes Liburd.

“She was so tiny and cute at birth it earned her the nickname Doll. She is the only surviving sibling and the only one who never migrated to the United States,” she said.

Mrs. Hobson attended the St. James Church School at White Hall and according to her daughter, she would often speak of the hardships she endured during those years which were during World War I. During that period her sister and her shared only one school dress which meant that they each went to school every other day.

She grew up to be an avid reader especially of the Bible and other religious literature and according to her daughter “Tappa” was often called upon to assist the elderly in her community with their communication with relatives who lived abroad.

“Amabelle “Tappa” gave birth to seven children, two of which have already passed. She is the grandmother of 13, great grandmother of 30, great, great grand mother of 14. That however, never stopped mama from playing an active part in the raising of 10 children, some relatives and some from other communities.

“Mama was a classy lady of many talents – a seamstress, estate house worker, gardener, baker, cook and one of the most excellent hosts you can imagine,” her daughter said.

Mrs. Hobson was the daughter of an estate overseer which allowed her to acquire a wealth of knowledge from an estate in St. Johns to Cades Bay in St. Thomas.

“Tappa” touched the lives of about every household in her community. She has over 40 God children. She assisted in fitting and dressing many brides; she baked the wedding cake and when there was no alternate reception site, her small living room was the venue.

Before the introduction of funeral homes, she was the one to bath and dress the dear departed in her community.

When utility and road crews visited her area, it was not uncommon for her to provide them with a hot meal.

As her home was the first in her community to acquire telephone, electricity and water, many times she was asked to host entire families returning from abroad.

Mrs Hobson described her mother’ personality as warm, generous and unselfish. She said “Tappa” was God-fearing, devoted and loyal to her church.

“When she prays especially at mornings and before bedtime the community is remembered, the police, the sailor, the pilot and she calls them out by names doctors, nurses and leaders of government she prays for persons in every facet of life.
”
Tappa” has weathered many storms yet she never allowed herself to be consumed by personal adversities which at times overshadowed her happiness,” she said.