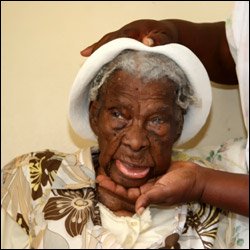 During a brief ceremony to mark the milestone at her home on Thursday November 13, Minister of Social Development Hon. Hensley Daniel referred to her as the matriarch of the village, who had the opportunity to nurture several young people in the community. He said it was remarkable that they all had found the time to return to thank Mrs. Drew.

The Minister used the opportunity to underscore the Nevis Island Administration’s initiative to celebrate the elderly and commended families of the elderly who assisted.

“I want to commend the family for caring for them because the care suggests to them that they are not neglected that they are appreciated and that their contribution is valued,” he said.

Mr. Daniel also noted that the government had recognized that it was because of the solid foundation made by people like Mrs. Drew 100 years ago, that the island had grown.

“We want to connect what happen 100 years ago with what’s happening now that is why we have not the Brown Pasture school now but the St. Johns Primary School on the Flats, the children despite the difference are still coming to celebrate with her.

“All that happened 100 years ago is connected with what’s happening now. The Brown Pasture that we know used to hold all of the children and grand children for Mrs. Drew but now it is holding children from a wider catchment,” he said.