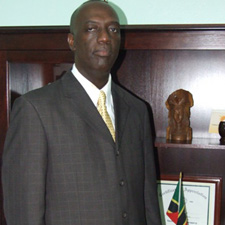 “I don’t get involved in politics, I deal strictly with law enforcement but I can tell you I have the full support of Premier Parry and Prime Minister Douglas none of them has ever called me to interfere with what I am doing.”

Those were the words of Commissioner of the Royal St. Christopher and Nevis Police Force Celvin. G. Walwyn in an interview with the Department of Information on Tuesday April 24, 2012 regarding the Nevis Island Administration’s support to the law enforcement agency.

“When I do something it’s done and that’s it but as far as giving us materials they gave what they can, the community also gave what they can but I can tell you they are 100 percent behind what we are doing,” he said.

The Commissioner was at the time visiting the primary and secondary schools in Gingerland one day after meeting with villagers of Brown Hill and ahead of a planned walk through in the village of Rawlings on Saturday April 28th, 2012 to meet with residents in the area.

He attributed his recent increased presence on Nevis to the strengthening bonds between the police and the public.

“The reason why I came to Nevis is because I want to make sure the police and the community continue to engender a relationship that would lead to a decrease in crime. We have seen the support slowly coming to the police over the last few months and I would like to make sure that this stays and gets even better,” he said.

According to Commissioner Walwyn, he would continue to do all he could to reach every day people in the fight against crime.

“I am the Police Commissioner but I am also a person and even though this is supposed to be a high office, I am willing to come down to earth with the people because I am one of the people and embrace the people in the fight against crime.

“Last night I believe well over 65 persons had turned out in Brown Hill. That was great, you know with that kind of turnout, it tells me that the people are concerned about crime and the police/community relationship and if that can come out then it is my duty to come and meet and to answer any questions that they may have,” he said.

Since Monday night’s meeting in Brown Hill, the Federation’s highest ranking Police Officer said some changes had already been implemented based on the questions he received then.

Regarding his meeting with the students at Gingerland, he said it was important for the police to embrace the island’s children and teach them to make a difference in the society.

“We have to get with the children embrace the children and teach them ways to make a difference because they are the future but as we have seen, a lot of our crime has been with teenagers and if we can reach these children now we won’t have to apprehend them later so I’d rather reach than apprehend,” he said.

The Commissioner further indicated that steps had already been taken in the Federation through a mentoring programme called Magic.

“We mentor, advise, guide and instruct children and the programme came to us from Orange County Florida. We brought an instructor in at no cost to the Federation, to train officers in St. Kitts and Nevis to help deter children, Kindergarten to 3rd Grade, ages 10-13, to deter them from a life of crime.

“As I spoke to the children this morning I told them I have noticed in the last couple of weeks and last month, we have had a lot of people who have been coming to get Police Records to get their Green Cards. We know times are hard here in this country right now and people would like to do better for themselves and their children. Unfortunately, I don’t have the power to give you a certificate saying you don’t have a criminal record when you have one. As a result they cannot get their Green Card. So whatever struggles they are having right now they will have to endure. Crime does not pay and it affects you for the rest of your life,” he explained.

During his visit to Nevis, the Commissioner was accompanied by Assistant Commissioner of Police in charge of the Royal St. Christopher and Nevis Police Force Nevis Division Robert Liburd and officers stationed there.