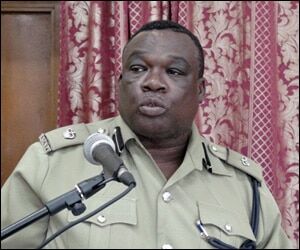 Head of the Nevis Division of the Royal St. Christopher and Nevis Police Force Superintendent Hilroy Brandy says as the primary law enforcement agency in the Federation, the Police, is obligated to keep the community safe through collective effort, commitment and dedication to duty.

The Senior Police Officer’s comments came when he delivered remarks at the division’s annual New Years’ Service at the Charlestown Police Station on January 04, 2016. It was held with the theme “Fostering Community Relations to ensure Crime reduction.”

He said if they are to keep the public safe, police officers have to be more visible, accountable and accessible in what they are called to do.

According to Brandy, the division will be targeting a number of critical areas “robberies, gun related offenses, break-ins, drugs, gang related violence, domestic violence, sexual and traffic offenses to reduce the incidence of crime in 2016.

He also spoke to a necessary partnership between the community and law enforcement in the fight against crime.

“A valuable partnership where policing not only reflects and responds to the needs of the community but where the community also plays an active role in delivering viable solutions,” he said.

The Senior Police Officer stated that the division is committed to achieving all that it has set out in its challenging policing plan but added that the police would not be successful without the assistance of the community.

In his view, safer streets will depend on a strong community of active citizens. Mr. Brandy appealed to partner agencies, prosecutors, courts, probation officers and jurors to work together to achieve the targets laid out in the Strategic Policing Plan.

Also present at the service were Rev. Telford Matthew who delivered the sermon and featured speaker Evered Herbert while Inspector Conrad Bertie served as the chairperson.