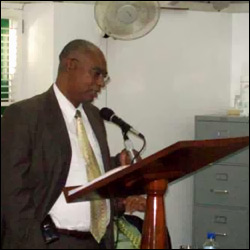 Premier of Nevis, the Hon. Joseph Parry, has appealed for calm and said the Nevis Island Administration (NIA) is doing everything within its means to ensure that the recent upsurge in criminal activity on Nevis continues to be properly monitored.

“I have had regular discussions with the police and they have assured me that they are working very closely with the police in St.Kitts, in terms of monitoring movements between St.Kitts and Nevis, efforts are also being made to increase the number of persons on the force in Nevis and for Culturama, special arrangements have been made”.

During the Premier’s opening “Statements by Ministers”, he made an appeal for the people of all the various communities in Nevis to be our brother’s keeper.  He urged the general public to make information on suspicious activities available to the Police thus assisting the Police in crime solving.

“Nevis depends on Tourism for its livelihood and this is not the time for us to surrender to criminal forces that seem to be sweeping the Caribbean. I appeal to young people especially. There is enough work for all and there is no need for them to take what does not belong to them. They need to stay out of people’s shops and homes and refrain from criminal activities!”

Premier Parry also mentioned that there has been a surge of gun related crimes in the Caribbean.  He said he would like young people to leave guns alone and report immediately to the police if they see persons handling guns who should not have guns in their possessions.

“Over the years there have been at least two deaths of innocent bystanders because persons who could not use guns properly and should not have guns have fired after persons who they did not intend to hurt. We are not advocating for any one to be killed, but we must settle our disputes by other ways, not with guns,” said Premier Parry.

Premier Parry called on the Church, parents and leaders in the community to talk to young people and help them to refrain from acts of crime.

Since Premier Parry’s Nevis Reformation Party led Nevis Island Administration took control of government in July, 2006, Premier Parry and Deputy Premier, the Hon. Hensley Daniel has addressed crime on radio, television and print media. They have also tackled the crime issue by introducing numerous programs that would assist young people; such new initiatives include the Homework Assistance program, the training of young men in Trinidad in various disciplines and sponsored classes providing skills in computer literacy.

“I am convinced that the activities of crime is not out of control or exceedingly high, but there has been a change and we must seek to arrest it and do something about it and this is what this government is doing.”