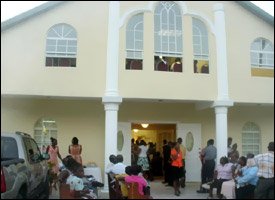 Sunday afternoon saw the New Shiloh Baptist Church doors thrown open for the first time, and the seating capacity stretched to its maximum, as the Church celebrated its 34th Anniversary with a grand Dedication Service for the congregation’s new Sanctuary in Ramsbury Site, Charlestown.

The Theme for the 34th Anniversary Service and Dedication of the Sanctuary is: “Earnestly Contending For The Faith.”

Premier of Nevis, the Hon. Joseph Parry congratulated the Pastor and his congregation on their new sanctuary as he made brief remarks at the service. He also asked all of the clergy present, to become more involved in the community and went on to say:   “We as a community need to take stock of our children and take back our community!”

Songs were performed by the harmonious Shiloh Baptist Choir as they rendered, “The Church’s One Foundation” and “To God be the glory”. Other items came from the Calvary Baptist Church, First Baptist Church, the Eden Brown Church of God, Mr. Cleve Wallace and a duet by Brother Leo and Sister Sonia.

During the ceremony, a stimulating Sermon was delivered by Bahamian Evangelist Kwame Selver.

Pastor of the Church, Mr. Eric Maynard reminded the congregation that “God is always in the midst”.  He said that there were times when things looked bleak and it looked like the Church was not going to be able to meet its deadline, but he said he knew it would have opened on Sunday, October 19th, due to his faith in God!