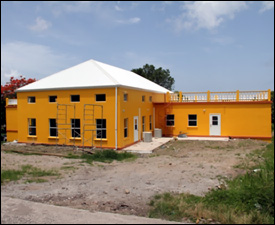 Premier, the Hon Joseph Parry, has registered his pleasure at the way the Department of Sports is engaging young persons in the parish of St. John’s in wind ball cricket, and has at the same time lauded the use of community centres in St. Thomas’ and St. James’.

According to Premier Parry, on Sunday June 10 he had gone to the Flats to watch a cricket match and was impressed by what he saw as teams from all over St. John’s were out there, but what inspired him more was the idea behind the hosting of the tournament.

“That (idea) is to bring people together especially young men and young women to see if we can once again build a better camaraderie and togetherness and in a way to fight crime. That way people get to know each other better,” said the Premier.

Hon Parry made the remarks as he addressed the Nation on his weekly live radio programme, “˜In Touch With the Premier’, on Choice 105.3 FM and other radio stations on Tuesday June 12, after a short break occasioned by official engagements overseas and the funeral of Nevis’ first Premier Dr Simeon Daniel.

“The young people get a better understanding, and they are less inclined to go out against each other, and I was very pleased to see the number of persons who were there observing that match,” said the Premier. “Trevor Chapman, Sports Coordinator, is the gentleman who has organized those matches with the direction and support of the Nevis Island Administration.”

He said he was further pleased to learn that other areas of Nevis are asking for similar tournaments and added that it struck him that perhaps St. Thomas and St. James can have a tournament as well. While the two parishes have good teams, he felt that they won’t be able to raise ten teams to match the St. John’s number.

“I understand that St. George has an interest as well, and this is what we want to do to bring people together and get people to be friendly towards each other again and forget all these crazy opposition and violent behaviour towards each other,” said the Premier.

On another subject, Premier Parry praised the people of Combermere, Fountain in the St. James’ Parish and Jessups and Barnes Ghaut in the St. Thomas’ Parish for making use of community centres that have recently been constructed by the Nevis Island Administration, saying that is exactly what the government intended.

As for the community centre at Cotton Ground, which was constructed at the same time with the four mentioned, Premier Parry, who comes from the Cotton Ground Village, felt that it was not being used as well as he would want it used, and promised to personally intervene to make sure that it is used for the benefit of the community as was the intention of the government.

“I have to get involved in Cotton Ground because there is some little problem there that shouldn’t be a problem and I do not like problems, which are not necessary and worse than that I don’t like problems created by human beings,” pointed out Hon Parry.

“When people are supposed to do work, take your ego and take your personalities out of the way and get the work done and this is what I really want to see taking place in Cotton Ground. It is a pity that I have to get involved but I certainly intend to get involved later this month.”