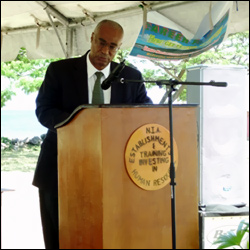 Premier of Nevis, the Hon. Joseph Parry stated that twenty-five years has made a tremendous difference on Nevis.  He made the statement with reference to the island’s progress since Independence in 1983, at the Career Fair Wednesday, May 14th, 2008, sponsored by the Nevis Island Administration’s Human Resource Department. The event, designed to expose the public, especially our young people, to the various career options, as well as to create awareness with regard to the functions of the Human Resource Department. The event took place at the Nevis Cultural Centre, Old Hospital Road in Charlestown. The theme this year was:  “Get Trained! Get Certified!”

“We are at a crossroads in our society. Today, we are talking about geothermal energy, 21st Century Telecommunications, the Brown Hill Call Center and a great hotel named Amman Resort”¦We are talking about diversification of the economy in Nevis. Twenty-five years ago one could only think about teaching, police, the civil service; today, there are numerous career choices,” said Premier Parry.

The Premier discussed geothermal energy stating that he does not believe that a large number of Nevisians understand the full extent of the operation.

Premier Parry then talked about 21st Century Telecommunications, which will be setting up their headquarters in Nevis shortly. “There are offices in St.Kitts, Dominica, St. Lucia and Grenada; but the company’s CEO- Mr. Alec Saini has chosen Nevis as their headquarters. He said he wants Nevis to be the envy of the Eastern Caribbean,” Premier Parry told the extremely receptive audience.

Meanwhile, the Nevis Island Administration has identified a site in the Pinney’s area where about 200 local and foreign employees will be working for the company.

“Nevis has achieved a lot over the last twenty five years and things are looking positive for the island’s future,” remarked the Premier, amidst thunderous applause. “Under this government the island is diversifying in many areas to give numerous opportunities for the young people of Nevis,” he said.