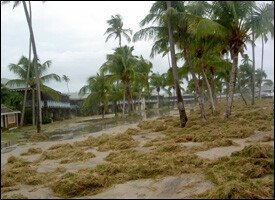 The Beach At Four Seasons After Hurricane Omar

Premier of Nevis, the Hon. Joseph Parry, will be meeting with the Four Seasons Resort management team to discuss the future of the property on the island of Nevis. The meeting will take place in New York on Thursday, January 22, 2009.

Premier Parry will be accompanied on this trip by Permanent Secretary in the Ministry of Finance, Mr. Laurie Laurence.

“The closure has affected the island in so many ways and the impact can be profound,” said Premier Parry.  He indicated that presently, the Nevis Tourism Authority has reported a loss of 65% in revenue since the Four Seasons temporarily closed their doors.

The Premier anticipates that this conference will be successful and Nevisians can rest assured that he will be back in Nevis this weekend to report on the outcome of the discussion.