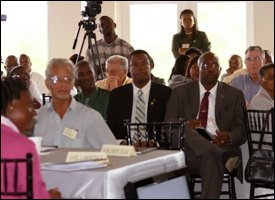 Premier of Nevis, the Hon. Joseph Parry laid out his Nevis Reformation Party led Administration position as a people driven government and as a catalyst for growth through people involvement when he delivered an address at the Third Consultation on the Economy. The event was held on Tuesday, Sept. 8th 2009 at the Occasion’s event hall at Pinneys Road.

Held under the theme: “Engendering a prosperous future by creating stability and growth through improved governance”.  The Premier said the theme was relevant to the “very fabric” of our society.

“Just as a society as a whole is directed by a body of values just so Government as an organization and every arm of Government must be held together by a creed or code of principles that ought to govern our conduct as we seek to deliver services to the people of our country,” he said.

Before 200 public and private sector officials, Mr. Parry re-iterated that the Nevis Reformation Party would continue to exercise good governance, transparency and accountability in matters of the economy.

While he discussed the issues of values and the present worldwide financial situation, Premier Parry noted John Kenneth Galbraith, an economist of the 20th century who had identified a number of factors that converged to do damage in the past and still continues today.

He pointed to the inordinate desire to get rich quickly with minimum physical effort, a world inhabited by people who wanted any excuse to believe wrong and people who always believe they could beat the system.

The Premier said that these three factors were continuously at work in the human mind and were good reasons why his Administration had to put in place a system of good governance, a value system and to be able to carry out regular reviews.

“A system of good values must be reinforced in every aspect of our lives and must be an intrinsic part of whatever code we are guided by in business or in government. Any departure or any laissez-faire approach to its application, signals the first rift in the fabric of our society,” concluded Premier Parry.