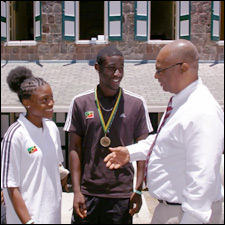 Premier of Nevis, the Hon. Joseph Parry welcomed two Nevisian athletes who returned to the island on Thursday to a hero’s welcome after participating in the recent Carifta games in Jamaica.

The athletes were 17 year old Adrian Williams who for the second time captured the Carifta Games gold medal in Javelin and 15 year old Renika Daniel who is the Federation’s best Under 17 , 400 meter runner.

After engaging in talk about the Carifta games, the Premier told the young athletes that he was proud of their hard work.

“You have made Nevis proud and early next month I invite you and your parents to a celebratory lunch in your honour,” stated Mr. Parry to the athletes in the presence of their parents.

Before Adrian and Renika made a stop to the Premier’s office, a ceremony welcoming the athletes took place at the Gazebo on the Charlestown Waterfront. Remarks were made by the Minister of Sports Hon. Hensley Daniel while Permanent Secretary in the Ministry of Sports Mr. Alstead Pemberton chaired the event.

Following the ceremony, there was a motorcade through the streets of Charlestown, to the delight of the Nevis public.