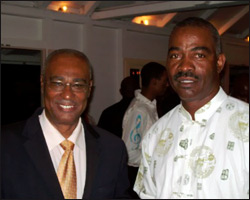 Members of the Nevis Alliance Progressive Society (N.A.P.S), of the British Virgin Islands, informed Premier of Nevis, the Honourable Joseph Parry that they have seen, and are extremely impressed with, the development and beautification of Nevis.  These sentiments were expressed during commentary on a power point presentation which was first shown to the group in Tortola about two months ago.

The group of thirty was hosted by Premier Parry at the Old Manor Hotel on Sunday, June 29th. They were treated to cocktails and entertained by the Humming Bird string band.

“Promoting Nevis has been a pleasure for me and making the change for a better Nevis is something we promised to do and we are certainly doing it,’ articulated Premier Parry.

While speaking at the ceremony, Premier Parry lauded his team, the Nevis Island Cabinet, for their assistance in making the past two years successful. He highlighted the training of young Nevisians, geothermal energy exploration, roads and water improvement, and other accomplishments of his government.

Amidst thunderous applause Premier Parry encouraged the audience to travel around the island and enjoy the new roads. He further mentioned that the water problems in some areas of Nevis would be alleviated because of the opening of a new well at St. James, which will supply over 600,000 gallons of water per day to St. James, St. Thomas and parts of St. Paul.

In a vein of generosity, the President of N.A.P.S, Mr. Anthony Lewis, stated that six wooden benches for the Nevis Airport were sent from Tortola and will be arriving soon compliments of N.A.P.S. “Our organization is about lending a helping hand to our fellow Nevisians at home and we will continue to assist where ever necessary,” said Mr. Anthony Lewis.

Meanwhile, the organization also paid courtesy calls on the residents of the Flamboyant senior citizens’ home to make presentations.