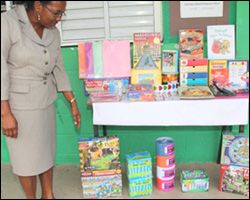 Students and Staff of the Joycelyn Liburd Primary School in Gingerland, registered thanks to the Glen Urquhart School (GUS) in Massachusetts, USA, for its most recent gift of school supplies for its Kindergarten class.

An appreciative School Principal Mrs. Marion Lescott told the Department of Information during a recent visit there, that the gift, one of many, had come because of a long standing relationship between both schools enjoyed.

“This year I was privileged to visit the school and from the funds raised for their Teddy Bear Day this year, I was able to purchase some items for the school. Now one of the things that stood out for me is the fact that this project also involved the parents and some of them donate books and other items towards the school [JLPS].

“I really appreciate the efforts of the school and so I would like to say thank you to Mrs. Sandra Thoms, her kindergarten class and the staff students and parents of the Glen Urquhart School in Massachusetts,” she said.

According to Mrs. Lescott, the long relationship between both schools though hundreds of miles apart, started about 13 years ago when Mrs. Sandra Thoms the Kindergarten teacher from that school visited Nevis for a vacation. She visited what it was known then as the Gingerland Primary School’s Kindergarten class as an observer.

On her return to America she started a community project, an activity which forms part of the school’s annual curriculum.

During Teddy Bear Day fund raising event at the school, all members of the GUS community are allowed to bring a stuffed animal to school for the day, in exchange for a donation used to send supplies to the JLPS. During the day the students are also taught about life in Nevis and their counterparts.