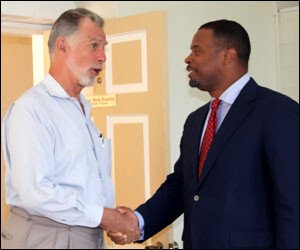 Foreign Affairs Minister of St. Kitts and Nevis and Deputy Premier of Nevis Hon. Mark Brantley on Wednesday 24 June, 2015, accepted a courtesy visit from Ambassador of the Federal Republic of Germany to St. Kitts and Nevis His Excellency Lutz Gorgen at his office at Bath Plain.

He exchanged courtesies with the Ambassador, who expressed his delight to be back in Nevis for a second time.

Mr. Brantley noted that during their meeting he took the opportunity to discuss with the Ambassador two matters that were of critical concern: the recent European Union (EU) blacklisting of St. Kitts and Nevis and the unfortunate position taken by the Dominican Republic in relation to its deportation of persons of Haitian decent born in the Dominican Republic.

Regarding the blacklisting of St. Kitts and Nevis, Mr. Brantley stated that it was a move inconsistent with the Federation’s efforts to engage positively and cooperatively with the international community, including the EU, on tax matters and had already signed 25 tax information exchange treaties, many with the EU.

In addition, the Organisation for Economic Co-operation Development (OECD) Global Forum had done reviews of St. Kitts and Nevis and found it to be substantially compliant.

He said the Ambassador promised to raise both issues with his Government and with the EU.