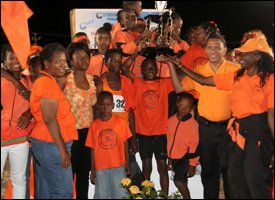 Minister with responsibility for Sports on Nevis Hon. Hensley Daniel praised the winners in particular the CPS for its zeal and commitment to winning but warned them of the advancing underdogs.

“It has insisted it must win in the last four years and I think it will have to pay some attention to St. Thomas in the future because yesterday’s competition showed St. Thomas very competitive and all the other schools have to give credit to Charlestown for pulling off another phenomenal victory,” he said.

“The fans in orange – even to look at the orange in the crowd, was enough inspiration for the athletes. That is not to say that the other school didn’t have but Charlestown is the largest Primary school and so you had a great show of support from the parents and the community. I want to thank everybody for ensuring a successful 2009 Primary Schools Athletic competition,” he said.

Mr. Daniel described the annual athletic contest as a display of remarkable talent and organisation and a celebration of excellence and used the opportunity to reiterate the Nevis Island Administration’s intention to provide improved facilities for track and field with the backing of the International Association of Athletic Federations (IAAF) in the near future.

He noted that the Nevis Armature Athletic Association (NAAA) had already put together a proposal to be presented to him as Sports Minister and together they would try to raise the profile of track and field in Nevis.

He thanked President of the NAAA Mr. Lester Blackett and his team for the steps that had already taken to raise the profile of the Inter Primary Sports Meet and had brought regional and international interests to the annual activity.

“They have brought more international and regional interest to the sport  – the representative from gulf insurance, someone from Sweden and when you have  the President for the North American, Central American and Caribbean Area (NACAC) Neville McCook in Nevis for an inter primary competition that is a major statement, that’s a huge endorsement.

“Gulf Insurance expanded their sponsorship this year in light of economic difficulties around that world that is remarkable. I think the children who took part in the sports they have something that we must hold them too,” he said

The Sports Minister was of the view that the kind of investment and effort by all concerned should result in a reduction in anti social behaviour and crime and greater success in academic performance.

“They have been given the kind of assistance and to whom much is given much is expected,” he said.