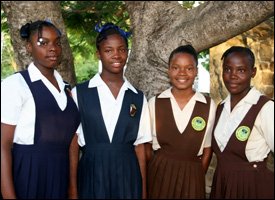 Four students from secondary schools on Nevis received scholarship awards of $500 on Thursday January 15, at the Alexander Hamilton Scholarship Fund Annual Tea Party and Awards Ceremony which took place on the grounds of Hamilton House, Charlestown. Advisor in the Ministry of Social Development, Mr. Halstead “Sooty” Byron made the announcement.

Mr. Byron urged students to continue to work hard, behave well and give respect to everyone in the community.  He also reminded them that their academic performances will be closely monitored.

The Nevis Island Administration through its Ministry of Social Development coordinates the event in collaboration with the Nevis Historical and Conservation Society (NHCS). Permanent Secretary in the Ministry of Social Development Mr. Alstead Pemberton who stood in for the Hon. Hensley Daniel brought greetings from the Nevis Island Administration.   He admonished the awardees not to take the assistance they received lightly.

“The fact that you have been chosen, tells me that your teachers have seen something special in you that they felt is worthy of our investment, so don’t disappoint your teachers nor those providing you with this scholarship.

“In short, we all want to see the return on our investment and I want to underscore that it must be a positive one,” he said.

While he congratulated the awardees, he also told parents to continue to foster and instill in their children the importance of education and learning. He commended the NHCS for its continued partnership and extended gratitude to those associated with organizing the event.

“I commend the NHCS for its continued partnership with the Department of Community Development in ensuring this annual tea party continues to be hosted after its revival in 2007.

“I also want to express our sincere appreciation and thank all those donors locally and overseas who would have made significant contributions to the Fund.”

Meantime, Executive Director of the NHCS, Mr. John Guilbert took the opportunity to make a major donation of EC$28,088.28 to the NIA’s Alexander Hamilton Scholarship Fund.

Mr. Guilbert said the donations were collected from the NHCS general membership and thanked his Board of Directors for their support in providing the educational opportunity for Nevisian students.