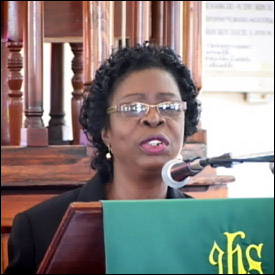 Education Advisor in the Nevis Island Administration (NIA) Mrs. Christine Springette appealed to students of the Charlestown Secondary School (CSS) to prepare themselves for the many opportunities that would become available in a developing Nevis.

She gave the advice when she stood in for Premier of Nevis and Minister of Education Hon. Joseph Parry at a celebratory church service on May 23, 2008, at the Charlestown Methodist Church, to mark the school’s 58th anniversary. The event was held under the theme “Augmenting the past to impact the future”.

“Do not sell yourself cheap. You may never have proof of how important you are even now. You are more important than you think and so I am hoping that each students delicate himself or herself to the opportunities which are open to you”¦some of you are passing many subjects but the future that some of you have chosen, is one of delinquency and disobedience and non performance.

“The country is developing and there is going to be great opportunities for jobs and for self employment for entrepreneurship. I am appealing to you to get ready for what is in store or else positions will be filled by persons from abroad because the country must develop and positions must be filled,” she said.

Mrs. Springette who was a former student and Head Mistress of the school congratulated the teachers for their hard work and acknowledged that teaching today was much more difficult  today then in her time.

“I want to congratulate the teachers because I really do believe they try very hard and I don’t try to measure myself with them because when I was a teacher teaching was so much [easier]. There were no drugs, when I left 20 years ago drugs was just creeping into the school system. There was no drinking, there was no great fascination with sex because there is a great fascination with sex “¦and children stood up when teacher entered the classroom,” she said.

Notwithstanding, Mrs. Springette also asked the students to reflect on their contribution to the school and to reflect on the relationships with persons who may have made a difference in their lives but did not take hold of the opportunities they presented.

She said the CSS had served Nevis well and had produced students that had gone on to hold major positions in and out of Nevis. She pointed to Hon. Hugh Rawlins who was recently appointed to serve as Chief Justice of the Eastern Caribbean Supreme Court.

Meantime, School Principal Mr. Edson Elliott also alluded to the school’s graduates who had impacted the world and gave a brief history of the school.

“It is incredible to consider but it is 58 years since this pillar in our society has impacted and I dare say the world “¦ because our graduates have traveled near and far to lend their positive influences.

“In June 1949, the late Ms. Helen Bridgewater MBE laid the foundation stone. On May 24, 1950, the newly built school was opened starting with 170 students and 10 teachers. The growth of the school resulted in the addition of a number of different blocks under the leadership of a number of principals and today the roll is 735 and 85 staff members including the ancillary staff,” he said.

Mr. Elliott also said that the Sixth Form College was established at the school on October 13, 1980 and its British Development Bank funded building was officially handed over to the government by Her Highness Princess Margaret on September 19, 1983.

The new CSS wing was more recently established with funding from the Caribbean Development Bank. It was equipped with funds from the World Bank and was officially opened on November, 02, 2007.

The Principal further said that over the years, CSS had provided support in various areas for many students.

“Over the years the institution has provided the academic, technical, physical, social, moral and emotional support for many students. We must now look to the future to provide even greater support. As a result, we anticipate the expansion of the staffroom, renovations to the hall and upward expansion of Bloc “C” very shortly. Our expectations are realistic because I am a devotee of the Nevis Island Administration’s 2008 Budget Address,” he said.

Mr. Elliott also projected a massive celebration of the schools 60th anniversary in 2010 but for the moment expressed thanks to the Almighty for having brought the learning institution thus far and many individuals including past principals for their sterling contributions to the school over the past 58 years.