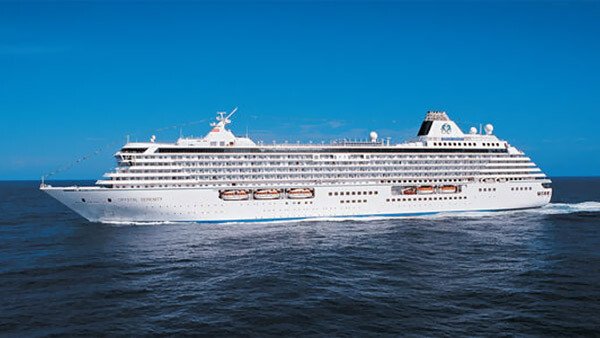 Crystal Serenity, one of the two cruise ships schedule to make an inaugural call to Nevis during the 2019/2020 cruise season.

Hon. Mark Brantley, Premier of Nevis and Minister of Tourism in the Nevis Island Administration (NIA) welcomed news from a tourism official at the Nevis Tourism Authority (NTA), of an increase in the number of cruise passengers expected to visit the island during the upcoming 2019/2020 cruise season commencing in November.

Following a briefing on the status of the upcoming season, the Tourism Minister thanked stakeholders for their continued assistance in the development of Nevis’ fledgling cruise industry.

Mr. Devon Liburd, Director of Sales and Marketing at the NTA in his cruise season update told Mr. Brantley that the statistics for this year’s season shows that there will be more passengers than last year.

“Nevis expects over a 100 percent increase in cruise ship passengers for this cruise season, with 64 calls scheduled from much larger ships than last season. The total passenger arrivals last season was 6,782 and that is set to increase to 14,485 for this season.

In November 2017, Mr. Liburd told the Department of Information that the cruise passenger capacity for the 2016/2017 season was about 9,386, and for the 2017/2018 season there was a capacity of 20,575 passengers, a sharp increase due to adverse weather conditions which had affected sea ports in the region in 2017.

Crystal Serenity was ordered from Chantiers de l’Atlantique (now STX France Cruise SA) on 7 November 2000. The keel of Crystal Serenity was laid on 13 June 2002 and she was launched on 10 August 2002 being completed on 30 June 2003. She was formally named on 3 July 2003, by Dame Julie Andrews, in Southampton, United Kingdom.

In November 2018 she emerged from an extensive redesign at Lloyd Werft Bremerhaven.